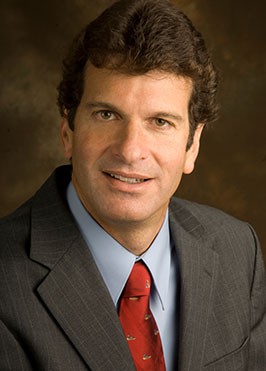 Jeffrey Rosensweig is the Associate Dean for Corporate Relations at the Goizueta Business School of Emory University. An international business and finance professor, his research, teaching, and consulting focus is business in the global economy. He also specializes in financial, macroeconomic, and business forecasting. A frequent keynote speaker on topics related to global strategy and economic trends, he was selected seven consecutive years as Keynote International Speaker by the Metro Atlanta Chamber of Commerce. He is selected annually as a keynoter at Wharton’s Securities Industry Institute. Dr. Rosensweig was selected in 1995 as the first Academic Advisor for the Society of International Business Fellows. He was named one of “America’s Young Leaders” in 1996 by the Swiss-American Foundation. In January 2000, Dr. Rosensweig was elected to the Council on Foreign Relations. Elected by the faculty in 1996, Dr. Rosensweig continues to serve as Chairman of Emory University’s Center for Ethics in Public Policy and the Professions.

Dr. Rosensweig is frequently quoted in the national business press on economic, exchange rate, international trade and investment, finance and global investing topics. He has appeared nationally on “ABC World News Tonight” and “Good Morning America”, the “NBC Today Show”, “NBC Nightly News”, and is a frequent economic commentator on CNN and CNN Headline News. He has published numerous papers in academic journals such as the Journal of International Money and Finance, the Journal of Business and Economic Statistics, and Economic Inquiry. His book, Winning the Global Game: A Strategy for Linking People and Profits, published by The Free Press of Simon & Schuster, received critical acclaim in 1998. His book, Patriotic Economics: How to Thrive While Helping America, was published in October 2001.

Dr. Rosensweig is the Director of the Global Perspectives Program at Emory’s business school. He developed and teaches the innovative Global Perspectives course. Among the distinguished visiting lecturers in this course are President Jimmy Carter and Prime Ministers or Ambassadors from Japan, the UK, Jamaica, Austria, and Singapore, and Chairmen and/or CEOs from leading global firms. Active in executive education, he received the “Distinguished Educator” award voted by Emory’s Executive MBA students for four consecutive years.

Dr. Rosensweig’s passion is helping others gain economic and educational empowerment. He donates keynotes speeches to aid this mission, ranging from the Caribbean to Estonia. Charitable organizations that he helps develop, as a keynote speaker and/or board member, include MAP International, CARE, and Project Destiny, as well as Rotary and economic development groups throughout the Southeast.