A New Avatar of Outsourcing

Recent trends suggest a new wave of outsourcing opportunities that Americans may end up falling in love with. The “Global Outsourcing 2020” event co-organized by the ICA Institute in Atlanta spurs this debate on “Reverse Outsourcing”.

A janitor in an empty American office answers a phone call: “I’m the only one left. They have outsourced…everyone else”. This is a snapshot from a series of cartoons that two University of Missouri professors analyzed in their research (2009) titled “Funny Business: Public Opinion of Outsourcing…” What started as a cost- cutting measure by US companies during Y2K era later became a hot topic of discussion in several disciplines including Information Systems, Business, Policy and Political science. While “outsourcing” and “ off-shoring” created immense job opportunities in emerging economies (India and China) in particular, they also became huge socio-economic issues for Americans.

Several experts argued that companies that outsource for short-term goals are short of vision. These arguments strengthened with increased service costs of the outsourcing companies. Simpsons and other American satires vehemently reflected the public sentiments about outsourcing by showing the menaces of job-losses, poor customer- care service and communication (language/accent) issues.

In the meanwhile, the “ outsourcing” companies kept expanding: in size, revenue, geographic foot-print, and product breadth & depth. With time, outsourcing seems to have become an integral part of the global business environment. Have a look at the Google Search Volume Index for the keyword “outsourcing” [Fig-I]. With time, the interest about outsourcing seems to have gone down. Now, look at the historical stock price trends of top Indian IT-off shoring companies [Fig-II] which tell an entirely opposite story. Surprised to see the contradiction? Don’t be. The anomaly is, perhaps, because outsourcing has become so integral to business-processes that people are not much amused by this concept any more. A similar contradiction lies in the Google Search Volume Index for the term “Reverse Outsourcing” [Fig-III]. As the curiosity about “outsourcing” decreases, internet-surfers worldwide have been showing greater interest in learning about “Reverse Outsourcing”. 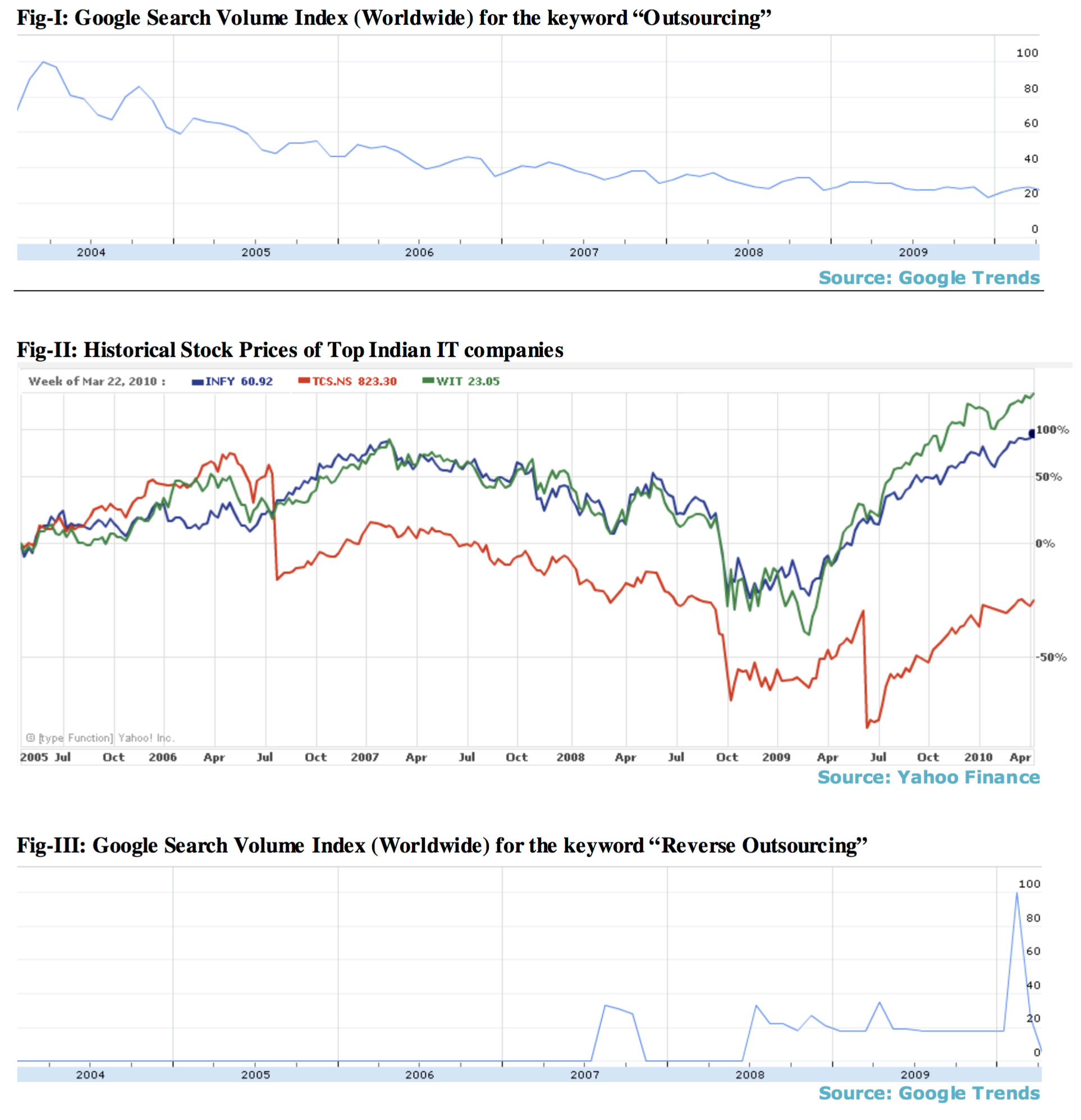 We, at India China & America Institute, canvassed expert opinions on this emerging trend during our recent conference titled “Global Outsourcing 2020” in Atlanta. As a series of distinguished speakers including diplomats, academics and business-leaders shared their insights, there seemed to be a consensus about the changing global business landscape: both in terms of the workforce and emerging technologies. Dr. Jagdish Sheth (a world authority in the field of marketing) pointed out the emerging trend of “Reverse Outsourcing.”.

Although reverse-outsourcing has multilateral, globally dispersed stakeholders, US, India and China remain the focus of our discussion. Interestingly, the interest about outsourcing among the India-China-America (ICA) triad seems to exhibit historical harmony. I analyzed the Google search pattern about “outsourcing” in the ICA triad since 2004 and discovered statistically very significant correlations between them (USA- India: 0.9; USA-China: 0.2; India-China: 0.2).

As the trends on “reverse outsourcing” have started building up; there seems to be numerous schools of thought about what exactly it means. Search the internet about “Reverse outsourcing”, and you will only be more confused; as all interpret this term in their own ways. I do not want to conduct a semantic discussion. Yet, here is our take on “reverse outsourcing”: it is the reversal of outsourcing pattern between two markets consisting of businesses and workforce.

What follows is a discussion on three types of business-models projected as “reverse outsourcing” on different sources. Their interpretations might be correct in their own right; yet, I take the liberty to name two of them otherwise; and identify only one of them as “Reverse outsourcing” in its “true sense”. Please note that the discussion is in the context of US, India and China only.

Some large American companies start selling their non-core competencies to other companies (mostly, within a geography) who may not be their conventional clients. A classic example is Amazon, primarily a book-selling company which, in 2006 formed Amazon Web Services to provide IT Infrastructure services in the ‘cloud’ to a new set of clients. Earlier, they were providing e-Business solutions to their non- conventional customers such as Borders. Another example is Walmart Realty, a division of the retailing behemoth Walmart stores, Inc. which provides real estate services to its clients. In contrast to Walmart’s conventional customers (retail buyers), Walmart Realty serves an relatively non-conventional customer base: businesses and stores.

Walmart might have considered outsourcing its real estate practice, a non-core business activity. Instead, they retained this practice within their own organization structure; and later leveraged on the built-up competencies to diversify their product portfolio. Is not this about “prevention” or outsourcing as opposed to “reversal”?

Recently, several non-American companies (and individuals) have been hiring American individuals to do smaller chunks of work. Websites like guru.com, odesk.com and elance.com act as matchmakers between individuals with specific skills and employers with relatively smaller, yet skill- specific tasks. ABC TV-channel recently reported that American freelancers made around $15 millions from non-US companies through this model.

“Retailed-outsourcing” would probably be a more appropriate name for this business model. The job-takers could very well be from India and China as much as from the US. “The reversal” of outsourcing, again, does not clearly manifest in this model.

Viola! The Reverse outsourcing happens when a foreign (say, Indian, Chinese or Brazilian) outsourcing company hires American employees. Motivations are multiple: cutting the travel and visa costs of employees from home countries, better understanding of the American markets (reducing the cost of “reworking” caused due to poor understanding of client requirements), higher client penetration in the American markets, and diversification of talent pool. A Chinese company, for example, is reported to have hired Lakota Express Inc., a small company owned by American natives to accomplish “ proof- reading” tasks of their deliverables. An Indian minister recently claimed that between 2004 and 2007 US earned around $105 Billion through jobs provided to Americans by companies with Indian head- offices. Indian IT giants such as TCS, Infosys and Wipro have been expanding (or plans to) their American employee-base in Cincinnati, Dallas and Atlanta respectively. These development/delivery centers are managed and trained by Indians. Here lies the reversal of outsourcing trends in its true meaning!

Apart from serving the business needs of the foreign companies, Reverse outsourcing may also help in improving public sentiments in the US about outsourcing. In fact, some thinkers believe that through the reverse outsourcing models, companies headquartered in emerging markets have contributed towards the economic recovery of the troubled US markets.

Reverse outsourcing is yet to define sustainable business practices for itself. Both American and foreign-parties need to leverage on each other’ s respective capabilities. The equity of roles of both parties will have to be ensured so that not only is the optimal blend of workforce achieved, the two markets (US and foreign) are well understood and tapped.

I was watching an ABC channel video where a panelist was educating the American viewers on how to set up a “personal connection” with their Indian clients. “…We work in different continents; but we are all part of this small world…” she urged. For sure, Reverse outsourcing has a promise to yield the best of the two worlds. Also, can we assume that the word “Bangalore” will soon reverse to its “Noun” status in the dictionary after having been used as a “Verb” (in a not-so-positive connotation) for several years?