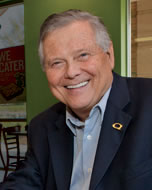 Kenneth A. Cutshaw serves as the Honorary Consul for the country of India in the United States. Kenneth A. Cutshaw serves as the Executive Vice President, General Counsel and Secretary of Cajun Operating Company, a private company based in Atlanta, Georgia USA. Cutshaw has experience in a wide spectrum of work experiences, including management, foreign policy, legal and business. He was formerly a partner with Holland & Knight, LLP, one of the larger law firms in the world. His practice focused on global business transactions.

He is a member of the Board of Directors of Haven Trust Bank, a community bank in metro Atlanta. He has served as an Adjunct Professor at Emory University, Georgia Tech and Georgia State University (GSU) teaching global business to graduate students. Cutshaw is past Chairman of Advisory Board for the Center for Global Business Leadership at GSU established in 2003. He is a Dean, co-founder and co-owner of Georgian American University (GAU) (founded 2004 in Tbilisi, Georgia). GAU is the first University in Republic of Georgia offering a JD Law degree.

He is a Principal of Kochhar Business Services, Kochhar LexServe and Pinkerton India located in New Delhi, India. He is an investor in enterprises operating in Tennessee and South Dakota focused on real estate management and in Texas focused on leaseholds interests in operating oil wells. Mr. Cutshaw is recognized for an expertise with international expositions. He has served as an adviser to the Bureau of International Expositions, a treaty organization in Paris France responsible for sanctioning World Expositions. He serves as the President and Co-Chairman of The American Council of Young Political Leaders, an NGO established in 1966 that has introduced thousands of young political leaders in over 50 countries to the political process. He serves on the Bush Administration Advisory Committee on International Economic Policy.

He received a Master of Laws international studies degree from American University (1987), a J.D. in business law from The University of Tennessee (1978), and a B.A. in public administration from The University of Tennessee (1975). He received two academic scholarships. Mr. Cutshaw is married to Diane Dracos Cutshaw. She is President of Family Wealth Services LLC. They have three children and reside in Atlanta, Georgia. His older daughter works for a Berkshire company in Knoxville, TN; and his 15-year old son and his 8 -year old daughter adopted from China are students at Westminster Schools in Atlanta. He is a native of Tennessee. Mr. Cutshaw is an avid outdoorsman participating in high-adventure sports, including mountaineering expeditions on six continents, flying, skiing, and golf. He is active in Scouting with his son. He is a global enthusiast and enjoys cultural events and all outdoor activities.