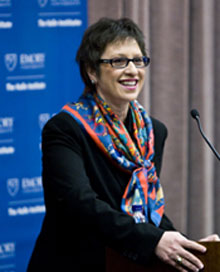 She received numerous fellowships and grants for her research over the years. Her PhD dissertation on media and politics in Britain was awarded the Samuel H. Beer Prize. In 1990-91, she was awarded a Research Fellowship from the German Marshall Fund of the U.S. and held a visiting position at the Zentrum für Umfragen, Methoden und Analysen (ZUMA) in Mannheim. She was a Research Fellow at Harvard University’s Shorenstein Center on the Press, Politics and Public Policy at the Kennedy School of Government in 1993. She received the Robert Worcester Prize for the 1992 article of the year in the International Journal for Public Opinion Research, and her 2003 article in The Journal of Politics, one of the top journals in political science, was recently named article of the year. Her most recent book Political Campaigning in Referendums: Framing the Referendum Issue (Routledge, 2004), co-authored with Claes de Vreese, focuses on the impact of the media in European referendum campaigns.

After completing her PhD in political science at the London School of Economics & Political Science (LSE) in 1987, she taught at the University of Michigan and Syracuse University before taking a chair as professor of audience and public opinion research at the University of Amsterdam in The Netherlands. She moved to Emory University in Atlanta in August 2003.